An update on "A Comparison of Programming Languages in Economics"

A couple weeks ago, I beat up an NBER working paper, A Comparison of Programming Languages in Economics. My response was a bit harsh though not entirely unfounded. However, there were some points on which I was clearly wrong, as I'll explain below.

The post also lead to a fruitful back and forth between the authors, particularly Jesus Fernandez-Villaverde, and me. (I also gather that others responded to the earlier version as well.) The result is an updated and much-improved version of their working paper. It incorporates the usage of Rcpp and includes a note on vectorizing the problem. In the end, I think the new version does R justice in its advantages and limitations.

In my earlier post, I made three basic points:


In my email exchanges with the authors, I also raised an additional point.
An example of the above and its assumed-preferred alternative is below.

The assumed better alternative would be

The stuff I got wrong 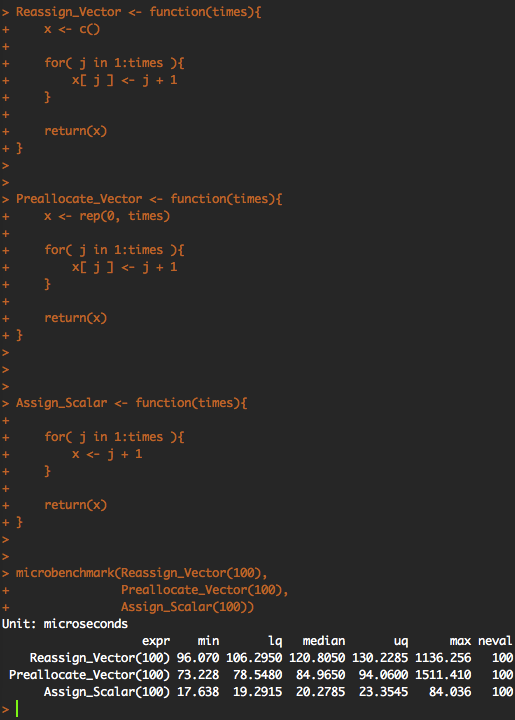 Second, my knee-jerk reaction to seeing triple-nested for loops inside of a while loop was understandable for the general case but off the mark in this specific case. As the new copy of the working paper indicates, vectorization does not work well for this problem. This does, however, highlight one of R's limitations. If your problem does not vectorize and cannot be run in parallel, you're kind of screwed if you don't know another language.

The stuff that was worth listening to

For better or worse, C/C++ are a big part of optimizing R. When we say "R is optimized for vector operations," we really mean "R's vector operations, like matrix algebra, are actually written in C." As a result, knowing C/C++ (or maybe even FORTRAN) is a part of R. Fortunately Rcpp makes this fairly painless and dispatches with much of the confusing programming overhead involved with C++ coding.

The problem that Drs Aruoba and Fernandez-Villaverde used for their speed test is a prime candidate for some Rcpp. This is also an example of what I mean by adopting a language's assumed paradigm. The "correct" R solution to this problem is to code it in C++, not R. Use R to reshape the data on the front end, call the C++ code that does the main analysis, and then use R to reshape the result, make your graphics etc.

I am still dubious of the utility of speed tests for most research applications. I've certainly run into times when speed matters, but those tend to be the exception rather than the rule. Though the authors made two points in our emails: speed is easy to measure, while other criteria are not; and many modern macroeconomic problems can take weeks to estimate in C++ or similar, making speed a more mainstream concern.

R is also poorly-represented in its comparison of coding speed, and I'm not talking about using  Rcpp. In 90% or more of the cases I've seen where R is performing abysmally, it is because of user error. Specifically, the R code is written like C/C++ code, lots of loops and "if" statements, rather than matrix operations and the use of logical vectors. Writing R code like it's... well... meant for R, is generally the best fix.

Forgive me for relying on anecdote, but I've written R code that works as well or better than some Python code. The issue was with how the code was written, not the property of the language. (I am sure the "best" Python code is faster than the "best" R code, but how often is it the case that we're all writing our "best" code?)

With those caveats: Drs Aruoba and Fernandez-Villaverde's new paper is not one I'd take much issue with, at least with its treatment of R. They give treatment to 3 clear and easy solutions to approaching their problem in R: raw R code, compiled R code, and Rcpp; the result is plain to see. Unlike other approaches I've seen, this paper shows you how fast R really is compared to other languages.
Posted by Tommy at 9:30 AM